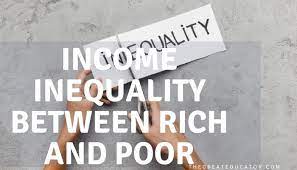 Income inequality is an economic condition in which monetary earnings vary significantly among society members, creating a vast disparity in wealth. Income refers to wages—the money paid to employees as compensation for work—and revenue from other sources, including bonuses, interest on savings, dividends from investments, profits on sales, and gifts.

Income accumulation creates wealth: the total value of assets owned (such as homes, cars, savings, and investments) less the total amount of liabilities owed (such as mortgages, car loans, student loans, and credit card debt) by an individual or household.

The earnings gap between the wealthiest Americans and the rest of the population has been growing for three decades in the United States. As of 2018, income inequality had approached the peak level it reached during the Gilded Age—the early twentieth-century era when top industrialists built tremendous fortunes. Ordinary laborers worked long hours under challenging conditions for meager wages.

The gap closed significantly during the Great Depression of the 1930s when a financial collapse wiped out much personal wealth. In the period of economic prosperity that followed World War II (1939–1945), Americans shared more equally in the benefits of income growth.

DRIVERS AND INDICATORS OF INCOME INEQUALITY

Income inequality in the United States is high in comparison to other developed countries. Economists use a measure known as the Gini coefficient to rate the equality of income distribution within a country from 0 (meaning every person earns the same income or complete equality) to 1 (meaning one person makes all the income and the rest earn nothing or absolute inequality).

According to the Organisation for Economic Co-operation and Development, in 2016 (the most recent year available), the United States had a Gini coefficient of .39, indicating that it had higher income inequality than countries such as the United Kingdom (.35), Germany (.29), and France (.29).

Although income inequality increased globally in recent decades, the pace of change was more rapid in the United States than in Western Europe. Between 1980 and 2016, the share of total income earned by the top 1 percent nearly doubled from 11 percent to 20 percent in the United States, while it increased only slightly from 10 percent to 12 percent in Western Europe.

As the rich have become richer, low-income and middle-income Americans have seen their wages stagnate. In earlier eras of US history, workers’ hourly wages rose steadily and increased their productivity. For instance, between 1948 and 1973, productivity increased by around 97 percent, while hourly compensation grew by 91 percent.

However, from 1973 to 2015, a 73 percent increase in productivity yielded only an 11 percent growth in hourly wages. Although economic growth continued to occur in the later period, workers received a smaller share of the benefits of that growth, while wealthy CEOs and stockholders received a larger share.

This situation became particularly pronounced during the economic recovery following the 2008 recession. Between 2009 and 2012, the top 1 percent of incomes grew by 30 percent while those of the bottom 99 percent increased by only 0.5 percent.

Economists cite several factors to explain wage stagnation and widening income disparity. Some argue that globalization has suppressed wages by forcing American workers to compete against low-paid workers in developing countries. Others blame workplace automation and information technology for eliminating good-paying jobs in factories and offices.

Another theory is that labor unions’ declining power allowed companies to dictate employment policies and suppress wages. Finally, some critics claim that decreasing government regulation and taxation of businesses, especially in the financial sector, enabled corporate leaders to inflate their salaries, bonuses, and stock options.

Income disparity and concentration of wealth have created inequalities in other aspects of American society. For instance, the extremely wealthy gain a disproportionate economic and political influence by contributing large amounts of money to political candidates and causes.

During the first phase of the 2016 US presidential election, 158 families accounted for half of all campaign contributions. These families disproportionately lean right, with 138 backing Republican candidates and 20 primarily backing Democratic candidates. According to critics, such contributions corrupt the democratic process by allowing wealthy individuals to influence government policy for their benefit.

A lack of socioeconomic mobility compounds the issue of income inequality. As the wealth gap has widened, it has become more difficult for people in lower economic strata to improve their life situations, particularly in the South and areas in the Rust Belt. Besides, many people born into high-income families receive a financial boost from the intergenerational transfer of wealth through inheritance, gifts, and educational opportunities.

A 2018 report by the Federal Reserve Board found that 56 percent of all intergenerational transfers of wealth went to people whose wealth already ranked in the top 10 percent nationally. In contrast, only 8 percent of transfers went to people in the bottom 50 percent.

Socioeconomic mobility is especially limited for racial and ethnic minorities and other marginalized groups that have experienced discriminatory treatment throughout US history. Notably, from the 1940s through the 1960s, the Federal Housing Administration employed a redlining policy to deny mortgage loans to African American families who wanted to purchase homes in suburban neighborhoods.

Due to this policy, African American wealth was about 5 percent of the white wealth in 2017, even though black incomes averaged about 60 percent of white incomes. The 400 wealthiest Americans controlled more wealth than all 16 million black households in the United States combined.

Some activists argue that the US government should pay reparations to African Americans to make up for the lasting economic harm done by centuries of slavery, segregation, and discrimination.

Surveys suggest that Americans tend to underestimate the extent of income inequality and overestimate their potential for upward socioeconomic mobility. For generations, people have viewed the United States as a land of opportunity where anyone willing to work hard can overcome their circumstances and achieve the “American dream” of prosperity.

This attitude is particularly prevalent among Republicans. According to a 2017 Pew Research study, 66 percent of self-identified Republicans attributed financial success primarily to hard work, while 56 percent attributed poverty to a lack of effort. Among Democrats, on the other hand, 60 percent attributed wealth primarily to having advantages in life, while 71 percent said poverty resulted from circumstances beyond a person’s control. T

he partisan divide in beliefs about wealth and socioeconomic mobility has many implications for government policy, particularly about welfare programs designed to help people escape poverty. Republicans argue that people should “pull themselves up by the bootstraps” and succeed without “government handouts.” In contrast, Democrats say that the bootstraps myth obscures structural forces in the US economy that reward the wealthy, penalize the poor, and increase income inequality.

Proposed solutions to income inequality include increasing access to higher education for students from low-income families, strengthening labor unions and legal protections for workers, and growing business and finance regulation. Another popular proposal involves increasing the federal minimum wage from $7.25 per hour, which provides an annual household income well below the poverty level, to $12 per hour by 2020.

The Economic Policy Institute notes that 35 million Americans would receive raises under this plan, which they assert would increase worker productivity, boost consumer spending, and lead to economic growth.

Although opponents claim that raising the minimum wage would harm small businesses and decrease entry-level job opportunities, some states and municipalities have already increased their minimum wages to $15 per hour or implemented plans to increase the minimum wage over several years incrementally.

Another proposal to address income inequality involves instituting a maximum wage in the form of a 100 percent tax on income above a certain level. In 2018 the Securities and Exchange Commission enacted a regulation requiring US corporations to disclose the ratio of total CEO compensation to a typical worker’s median wage.

As large corporations began disclosing this information, it raised public awareness of the vast discrepancy in pay between top management and workers. For instance, Honeywell revealed a pay ratio of 333:1, meaning that the CEO earned nearly as much in one day as an average worker did in a year.

Critics argue that executive pay should be capped at a certain multiple of the minimum wage to give wealthy individuals incentive to raise workers’ income.

Many approaches to reducing income inequality involve revising the tax code to allow low-income people to keep more of their wages and require wealthy people to pay more in taxes. Some economists suggest increasing the estate tax on inherited wealth.

Others propose eliminating the carried interest loophole that allows billionaire financial managers to treat their income as investments subject to a lower tax rate. The Economists argue that the tax reform bill signed into law by President Donald Trump in 2017 will intensify income inequality by reducing taxes on wealthy Americans and large corporations.