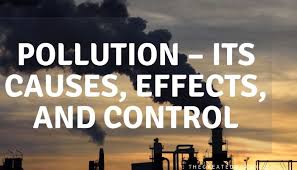 Pollution as a result of human population growth threatens many of Earth’s ecosystems.

Human Population as a Source of Pollution

As the human population grows, pollution from human activity also increases. Many activities—such as driving automobiles, farming, manufacturing, and power generation—release pollutants into the air, water, or soil. Typical results of such pollution are changes in the chemistry of the environment.

These chemical changes affect the nearby environment and the people who live there—and areas hundreds or even thousands of kilometers from the place of release. For example, substances released into the air may be carried by the wind and be deposited far away by rain. Currents in rivers, lakes, and oceans spread pollutants that are dumped into the water. Pollution in the soil can seep into groundwater and appear later in wells. Scientists have found evidence of pollution everywhere on Earth, from the largest cities to the remote and isolated South Pole.

Danger to Animal and Plant Life

Animal and plant life is sensitive to changes in the environment. For example, scientists have discovered extreme sensitivity in animals and plants that communicate by releasing biochemical compounds called pheromones. Some species can detect and respond to pheromone concentrations of as little as one part in a trillion—the equivalent of one teaspoonful in a lake that is 1 square kilometer (0.4 square miles) in area and 1 to 2 meters (3 to 7 feet) deep.

Such chemical sensitivity suggests to scientists that organisms may be easily affected by small but sudden changes in the chemistry of air, water, and land. Plants and animals may adapt to changes as they evolve over thousands or millions of years. But in periods measured in a few decades or even centuries, such changes may prove highly disruptive to many forms of life, including human beings.

Major Pollutants and Their Effects On Ecosystem

Strontium 90 chemically resembles the mineral calcium. Plants and animals absorb and store strontium 90 in tissues where calcium normally accumulates. In animals, strontium 90 accumulates in bone and marrow, the blood-cell-forming tissue, and can cause leukemia, a cancer of the blood. Small amounts of strontium 90 in the environment are a direct hazard to people.

Certain chemical pesticides used to control insects have also been well studied. Scientists can trace the chemicals’ effects because some compounds remain in the environment for a long time. In addition, they have been used in large amounts in many parts of the world.

Studies of radioactive and chemical contaminants have taught scientists a great deal about toxins’ hazards and their threat to people and nature. One of scientists’ most important discoveries was that toxins released into the environment not only circulate widely in air and water, but also may appear in living creatures in concentrations that are tens, hundreds, thousands, or hundreds of thousands of times higher than those measured in the air, water, or soil.

The concentrations of toxins in the food chain may be increased or decreased. For example, a single plant may retain only a small amount of a toxin on its leaves. A rabbit eating many such plants may absorb the toxin in all the plants. And when a wolf eats many rabbits throughout its lifetime, it absorbs the toxin in all the rabbits. In this way, the concentrations of a pollutant that is stored in animal tissues and not excreted may be dramatically more extensive in the tissues of some animals at the top of a food chain. This process is called biomagnification.

What Is DDT and Its Effects on Environment

The chlorinated hydrocarbons, a group of insecticides, illustrate this effect. These insecticides include DDT (dichloro-diphenyl-trichloroethane), a compound banned in the United States in 1972. DDT sprayed into the air kills mosquitoes and other insect pests. However, scientists have found that some of the compounds remained in the air and were carried far away and sometimes fell with precipitation into bodies of water.

DDT dissolves in fat but not water, so if the toxin contaminated a lake, river, or stream, it would bond to the fish’s fatty tissue. In predators that ate the fish, the chemical accumulated. Farther up the food chain, in human beings or other animals that eat meat-eaters, the compound could reach concentrations hundreds to thousands or more times greater than the concentration in the general environment.

In this way, DDT—before it was banned—reached levels high enough to seriously disrupt the reproduction of many birds in North America, especially hawks, owls, and eagles. The chemical affected the development of the birds’ eggs. DDT caused the birds’ eggshells to be extremely thin and fragile, so that the young died before they could hatch. DDT’s use caused the peregrine falcon to become extinct throughout much of its normal range throughout the Eastern United States.

Many countries, especially in the tropics, still permit the use of DDT. The compound continues to cause worldwide problems, because winds deposit it far from the place of use. As recently as 1991, researchers reported finding DDT and other U.S.-banned pesticides in U.S. lakes.

“Ecologists consider DDT and radioactive substances such as strontium 90 to be representative of contaminants as a whole.”

Radioactivity such as that of strontium 90 causes health problems in people even at low levels.

“Plants and animals will be protected if the amount of radioactivity released into an area is low enough to be safe for human beings.”

Small amounts of toxins such as DDT and other poisons, on the other hand, may not be a direct threat to people. Yet scientists have learned that this type of pollutant can accumulate through biomagnification, contributing to the loss of plant and animal life and ultimately threatening human beings’ health.

Scientists are collecting data concerning the effects of many other types of toxic pollutants. For example, air pollution can cause breathing difficulties and other health problems in people, aggravating diseases such as asthma and pneumonia, and contributing to the development of cancer and emphysema. Air pollution also harms plants and animals.

Also Read:  Women's Health: What is a better Pelvic Exam

Th oxides of sulfur and nitrogen are considered two of the most serious air pollutants. A significant source of these compounds is the burning of fossil fuels (coal, oil, and natural gas) in industry and in transportation. The pollutants usually occur with high levels of other toxins such as lead, zinc, and ground-level ozone, a smog component formed by chemical reactions between car exhausts and sunlight.

“Acid rain results when the airborne pollutants combine with moisture in the air to form sulfuric and nitric acids that fall back to Earth, usually in rain or snow.”

Since the late 1960s, numerous scientific studies have demonstrated acid rain’s effects on the environment. These studies have reported that acid rain hinders plant photosynthesis (the process by which plants make food from water, sunlight, and carbon dioxide). Acid rain also contributes to the death of trees, destroys life in lakes and rivers, and damages statues and other structures.

The other pollutants such as metallic elements called heavy metals are part of the study. These contaminants can pollute the air, water, and soil. They include lead, mercury, silver, zinc, iron, copper, nickel, chromium, and cadmium. Some coal is rich in heavy metals, and burning it in electric power stations, incinerators, steel mills, and motor vehicles may produce air pollution containing the metals. The elements enter the atmosphere as microscopic particles called particulates. These particulates then fall to Earth and contaminate soil and water.

Scientists are collecting evidence of the effects of heavy metals in the environment. Studies show that exposure to lead in soil or water can cause nervous-system damage in children, for example, if human beings eat mercury-poisoned fish, the effects can be deadly. In March 1991, Joel Schwartz, a scientist with the U.S. Environmental Protection Agency, reported that as many as 60,000 people in the United States might die prematurely each year due to particulate pollution. In August 1991, measurements of mercury levels in fish caught in several U.S. lakes prompted officials in 20 states to warn consumers against eating fish from those waters. Heavy metals also threaten the growth of forests by disrupting the supply of nutrients in the soil.

What are Water Pollutants

Besides acid rain and heavy metals, other pollutant such as waste from industries also contaminate rivers, lakes, streams, seas, and oceans. It is a particularly important cause of water pollution. Factories may dump waste containing toxic chemicals directly into bodies of water or into sewerage systems. Sewage itself is another major contaminant of water that can cause ecological problems and such human diseases as cholera and dysentery.

Chemical pollutants released into water or spread through the air are often invisible to the human eye. But the growing masses of solid waste that people produce are an all-too-visible pollutant in the form of trash.

The EPA estimates that by 2000, the United States will generate about 175 million metric tons (193 short tons) of solid waste per year. According to the U.S. National Solid Wastes Management Association, an organization of businesses that collect, dispose of, and recycle trash, about 83 percent of U.S. solid waste goes into landfill dumps.

In most landfills, operators spread Earth over the most recent garbage to keep rats, flies, and other vermin away. But landfills still pose a widespread pollution hazard.

Apart from the land that landfills pollute, they can also poison underground reservoirs of water with metals and dangerous chemicals from packaging materials and other debris. This happens when rain seeps through garbage, dissolves the metals and chemicals, and carries them into the soil. Once in the ground, the compounds slowly filter down to enter water supplies—which are often used for drinking water. As solid wastes fill more and more landfills, this form of water pollution is an increasing concern.

How To Clear the Water, Land, And Air

To protect people and the environment, most developed nations have placed limits on the amount and types of pollution released into the environment. But laws and political boundaries cannot stop the spread of pollution through the air or the water. Therefore, nations and states with high pollution levels can adversely affect those with the strictest pollution laws.

Question of Safe Level of Pollutants

Another difficult question involves what level of pollution is safe. Many laws require that pollution levels not exceed those found to be harmful to people. But, as scientists have learned through the study of DDT and other pesticides, it may be necessary to protect plant and animal life to protect people.

Doing so would require much more restrictive standards than those based merely on protecting people from direct contamination. Yet experts say that enacting such tough standards is the only way to assure people’s protection from the poisoning of the environment that is now underway.