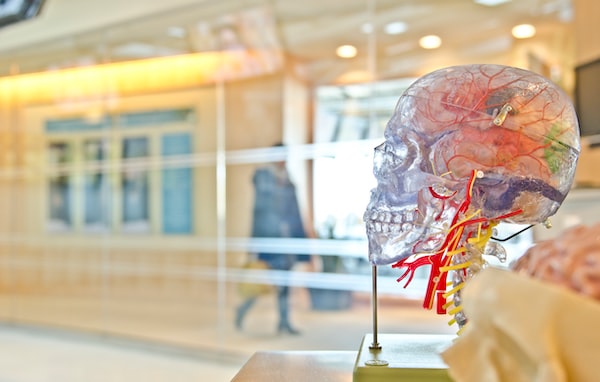 Alzheimer’s disease is a progressive brain disease that destroys memory and thinking skills. Alzheimer’s disease can be treated, but as yet there is no cure. As the disease advances, people may experience increasing confusion and be unable to recognize members of their family. They may even forget their own names.

In the later stages of the disease, people with Alzheimer’s may be unable to perform the basic tasks of self-care. Rates of Alzheimer’s are expected to increase dramatically as the U.S. population rises, posing serious challenges to health care providers, families, and society.

As of 2009 between 2.4 million and 4.5 million people in the United States were estimated to have Alzheimer’s. The risk of developing the disease increases with age, and the number of people with the disease doubles for every five-year interval beyond age sixty-five. The disease is common among people over age sixty-five, and affects about half the population over age eighty-five. Though Alzheimer’s disease is common, it is not considered a normal or an inevitable part of aging.

Changes in the Brain

Alzheimer’s disease is named after German physician Dr. Alois Alzheimer, who in 1906 described abnormalities in the brain tissue of a patient who had died of an unspecified mental illness. During autopsy, Alzheimer discovered unusual clumps (now called amyloid plaques) in parts of the brain, as well as tangled bundles of fibers (now called neurofibrillary tangles). It is now known that these plaques and tangles are distinguishing features of the disease.

The brains of Alzheimer’s patients also gradually lose connections between nerve cells, or neurons, in the brain. Without these connections, neuron function weakens, and neurons eventually die. The damage spreads to the hippocampus, a region of the brain essential to the formation of memories. As neuron death increases, brain tissue in affected regions shrinks. By the end stages of the disease, this damage is widespread throughout the brain.

Alzheimer’s disease begins in the regions of the brain that affect recent memory, and gradually spreads to other parts of the brain. Neurological research has determined that this brain damage begins ten to twenty years before other symptoms of Alzheimer’s appear.

Alzheimer’s disease is the most common cause of dementia in older people, but Alzheimer’s and dementia are not identical. Dementia is a condition in which cognitive function gradually declines. Dementia can be caused by several things, including strokes. It can also result from some medications. Although people with dementia have many symptoms that are seen in Alzheimer’s disease, they do not have the same kind of brain damage that affects people with Alzheimer’s.

One of the first symptoms of Alzheimer’s disease is difficulty with memory. Other early symptoms may include mild impairments in movement, brain function, and sense of smell. Early Alzheimer’s disease can be difficult to diagnose, however, because some of these symptoms can be explained by other causes. New techniques in brain imaging, though, show significant promise in detecting the brain changes that signal Alzheimer’s disease.

As early Alzheimer’s progresses to mild Alzheimer’s, people experience continued memory loss. They may also encounter other cognitive problems, including getting lost, confusion about handling money, or asking the same question over and over again. Alzheimer’s patients are often first diagnosed at this stage of the disease.

In moderate Alzheimer’s, brain damage from the disease impairs language control, reasoning, sensory processing, and thought. Memory loss and confusion increase. Patients may lose the ability to recognize family and friends or to cope with changes in their surroundings. Some people at this stage show personality changes. They may experience hallucinations, or become paranoid. They may behave aggressively or belligerently. In the final stages of Alzheimer’s, patients lose the ability to care for themselves and to communicate. They cannot eat, walk, or even sit up. As they near death, they require constant nursing care.

The rate at which Alzheimer’s disease progresses through these stages varies, so it is difficult to predict. In general, people die within an average of four to six years after diagnosis. However, the duration of the disease can be as long as twenty years.

The cause of Alzheimer’s is not yet known, but researchers believe the disease is the result of many complex interactions in the brain over a long period of time. One avenue of study is to explore how the aging process contributes to neuron damage.

For example, as people age, they experience a loss of dopamine, the brain chemical associated with pleasure and reward. New studies suggest that this loss may slow metabolism in the region of the brain related to cognition. Other studies suggest a relation between the development of Alzheimer’s and the presence of age-related inflammation in the brain.

Evidence also points to genetic factors as a risk in developing Alzheimer’s. Though most people who get the disease develop it at older ages, people as young as in their thirties have been diagnosed. In families where such early onset exists, data show that genetic mutation causes the disease.

Research has also linked a gene called APOE, which has several forms, to later-onset Alzheimer’s. About 40 percent of all people who develop late-onset Alzheimer’s carry a specific form of this gene. Another gene, SORL1, is being studied as a risk factor for developing Alzheimer’s.

Researchers also emphasize the importance of good overall health in reducing the risk of Alzheimer’s disease. Good nutrition, regular exercise, healthy weight, social contacts, and mental stimulation can lessen the risk of cognitive decline and of Alzheimer’s. The possible connections between Alzheimer’s and heart disease, hypertension, diabetes, and obesity are also being studied.

The only way to diagnose Alzheimer’s disease with certainty is to perform a brain autopsy to determine the presence of plaques and tangles. But health professionals have developed effective ways to improve the accuracy of diagnosis by clinical tests and interviews. Brain scans, such as magnetic resonance imaging (MRI) tests, can provide relevant information, as can blood, urine, or spinal fluid tests. Doctors also ask patients to perform tasks that test their memory, problem solving, attention, counting, and language skills, and ask them about recent changes in cognitive ability or memory.

Diagnosing Alzheimer’s early makes it possible for health care providers to initiate early treatment, which may help slow the progression of the disease. It also gives family members time to educate themselves about the disease and make plans for the future needs of the patient. These may include making arrangements for nursing home care when appropriate, or for organizing family networks to assist with home care when that is feasible.

People with Alzheimer’s confront many changes in how they experience daily life. People in mild stages of the disease may continue to live independently for some time, using behavioral aids to complete daily tasks that have become difficult. A simple written schedule, for example, may help a person remember to eat meals and take medications. People with mild Alzheimer’s may also need assistance with bill paying and other legal matters. People who are still in the workforce when they are diagnosed with Alzheimer’s sometimes continue to work, on the advice of their doctor, until they no longer feel able to do so.

As the disease progresses, it becomes unsafe for a person with Alzheimer’s to drive a car. At this stage, people may also need to change living arrangements so that they have regular supervision at home. Because of confusion and forgetfulness, living alone can be dangerous. A person with Alzheimer’s may turn on a stove and forget to turn it off, or wander away from home without knowing how to get back.

Medications, exercise, and regular social interaction can help a person with Alzheimer’s function relatively well. Eventually, however, as the disease reaches its late stages, the person will need constant care.

The Alzheimer’s Association reported that the cost to Medicare for treating people with the disease, which was $31.9 billion in 2000, was expected to rise to about $49.3 billion in 2010. Stephen McConnell, the association’s vice president, stated that the “imminent epidemic of Alzheimer’s disease threatens to bankrupt Medicare and Medicaid,” and called on the U.S. government to increase funding for research on the disease.

Much of the cost to Medicaid in treating people with Alzheimer’s is for full-time nursing care in the late stages of the disease, Private insurance and Medicare do not cover this expense. Many Alzheimer’s patients who qualify for Medicare and exhaust all their financial resources can then receive Medicaid, which covers all or part of their nursing home costs.

Families often absorb most of the cost of caring for Alzheimer’s patients during the earlier stages of the disease. In 2006, for example, about 70 percent of people with Alzheimer’s were living at home, where families provided approximately 75 percent of the costs for care. In 2008 this unpaid labor represented 8.5 billion work hours valued at some $94 billion.

Alzheimer’s also imposes a high cost on business in the United States. According to one estimate from 2006, U.S. businesses lost some $36.5 billion per year because of absenteeism, lost productivity, and higher costs of providing health insurance benefits to employees.

Alzheimer’s exerts a profound emotional toll on families and caregivers. The damage can start even before diagnosis, when the affected person’s behavior starts to change in negative ways. Not realizing that the conduct is the result of Alzheimer’s, family members may interpret the behavior as intentional and withdraw their affection and emotional support. As the disease progresses, the fact that Alzheimer’s patients lose their ability to recognize loved ones can be devastating for spouses and children.

Professional staff who care for Alzheimer’s patients are also affected, reporting higher than average levels of stress, which can led to health problems such as depression.

Advocates for families affected by Alzheimer’s say that the disease threatens to bankrupt families, businesses, and the U.S. health-care system. They argue that Congress should create legislation improving care for Alzheimer’s patients and should increase funding for research. Advocates have also pressed Congress to allow those who develop Alzheimer’s disease at a relatively early age access to Medicare.

In 2009 Congress authorized funding for Alzheimer’s-related research at the National Institutes of Health (NIH) and the Centers for Disease Control (CDC)’s Health Brain Initiative of $31 billion and $2 million, respectively, an increase of 9 percent over the previous year’s funding.

Another promising development is pending health reform legislation. The Senate Health Care Reform Bill, if passed by the full Congress, will make it illegal to deny health insurance to persons with pre-existing health conditions. This provision will ensure that younger people who develop Alzheimer’s are able to purchase health insurance.