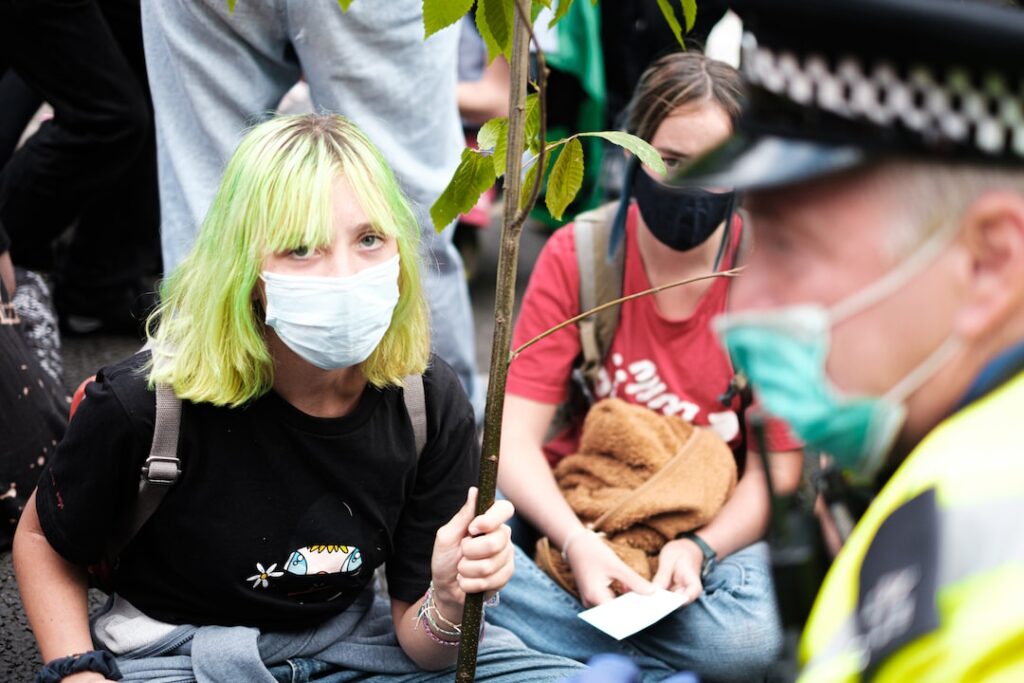 Child protection is the idea that children have a right to basic support to help them grow up mentally and physically healthy, including safe living conditions, enough to eat, health care, education, and protection from violence, abuse, and exploitation. Child welfare refers to the array of private and public entities, including governmental agencies, as well as regulations at the federal, state, and local level that provide child protection to minors. These regulations involve setting standards of care, banning child labor, and defining the conditions under which the state must intervene to protect children.

Federal and state legislators play a key role in allocating funds and determining priorities for child welfare policy. Throughout the United States, families, advocates for child welfare, and policy makers can differ on issues including regulations on fostering and adoptions, conditions that require children to be removed from a home, and eligibility requirements for support programs like Medicaid and Supplemental Nutrition Assistance Program (SNAP).

In 1959 the United Nations (UN) issued a Declaration of the Rights of the Child, later expanded into the Convention on the Rights of the Child (CRC). Among other things, the convention calls for the birth registration of each child, substantial legal protections for children, an end to dangerous and exploitative child labor, and free and compulsory primary education for all children. In 2020 the United States was the only UN member that had not yet ratified the declaration.

Ratification is opposed by some conservative politicians and activists, who argue that the CRC would unconstitutionally infringe on US sovereignty. Opponents to US ratification of the CRC also point out that even among nations that have ratified the convention, adherence varies widely, and many countries fail to meet at least some of the requirements. The idea that children have rights, and that society has a duty to guarantee those rights, is new in many cultures. Even in nations that are already engaged in child welfare reform, providing such rights as a safe and supportive home environment, healthful food, decent housing, education, and basic health care for all children might require significant political and economic changes.

In addition, developing successful child welfare laws requires care and planning. The laws must balance traditional parental authority with the government’s duty to protect those who are too young to protect themselves. The laws must also consider cultural traditions, the economic needs of families, and the amount of resources the government is willing to spend on children.

National and international bodies have criticized the United States because of Trump administration immigration and foreign policies harmful to child welfare. A “zero-tolerance” policy, initiated in March of 2018, was intended to discourage both unauthorized entry and attempts to legally seek asylum and resulted in several thousand minors being separated from parents. Although the administration agreed to end official enforcement efforts in June of 2018, reports surfaced that the policy had been reactivated in 2020 as part of a general border crackdown during the novel coronavirus disease 2019 (COVID-19) pandemic. The separation policy has been widely criticized by human rights and child health advocates as potentially causing permanent mental and emotional damage to the children.

Attention to child welfare issues began with private social reform groups rather than the government. In the 1870s Societies for the Prevention of Cruelty to Children were formed in the United States and Europe. These were often closely connected to temperance organizations, as abuse of children was believed to be related to parents’ alcohol use. As reformers investigated the problems more deeply, many came to recognize that poverty itself was often the greatest threat to children. They found that many children in need of services were not orphans or deliberately abandoned but had widowed or abandoned mothers who could not care for them. By the 1910s many reformers advocated “mothers’ pensions” to provide financial support to “deserving” poor mothers so they could focus on properly raising their children. While forty states had mothers’ pensions, the funds were never enough to support more than a fraction of those who needed it, and the institutions discriminated against immigrants and nonwhite applicants.

Child welfare became a federal concern in the United States in the early twentieth century. The Children’s Bureau, established in 1912 to research and report on issues of child welfare, was the first national government agency in the world to focus specifically on the needs of children. In the first half of the twentieth century, reformers focused on ending child labor, decreasing child mortality, and improving nutrition through subsidized school lunch programs.

Over the course of the 1900s, child welfare experts attacked the then-traditional view that children are the legal property of their parents. People began to view children as separate individuals with identities, needs, and even rights apart from those of their parents. The government adopted legislation to protect children from abuse and neglect. New laws supported compulsory education and regulated child labor. In addition, states and communities created child protective services and similar agencies to safeguard children’s interests.

Among the most important child welfare reforms were laws that allowed the government to remove children from parental custody under certain conditions such as when children were suffering from neglect or abuse. In 1974 major federal child protection legislation was passed with the Child Abuse Prevention and Treatment Act (CAPTA). CAPTA provides federal funds for state child welfare agencies as well as research projects, data collection, and training. This legislation has been renewed and modified periodically and remained in effect as of 2020.

In 1980 Congress passed the Adoption Assistance and Child Welfare Act, which required child welfare workers to make efforts to keep children with their birth parents whenever they can do so safely. In 1997 federal policy moved toward making it easier to remove children permanently from ongoing abuse and neglect situations and provide for permanent adoption with the passage of the Adoption and Safe Families Act. By 2018 the foster care system in many states had become overwhelmed with the number of children in care, leading to many being placed in group homes, emergency shelters, and even juvenile detention facilities. The federal government responded with the Family First Prevention Services Act to provide more support for placing children with relatives or foster families and avoiding institutional care.

Despite such laws, both the government and society continue to recognize parents or other legal guardians as the primary decision makers and caretakers in children’s lives. This large degree of parental control stems from a widely held belief that parents are the people most likely to do what is best for their children.

Though many children in the United States live well, others continue to suffer. Despite the country’s great wealth, approximately 11.9 million children, or one in six children, lived in poverty in 2018. Of this number, around 73 percent were children of color; around one in three Black and Native American children and one in four Hispanic children lived in poor households.

In 2020 the COVID-19 pandemic drew public attention to this inequality as school closures forced education online, leaving many school districts scrambling to provide their students not only with computers and internet access but the free breakfasts and lunches their families relied on to make ends meet.

As public awareness of different types of child abuse has increased over the decades, so has the responsibility to report and intervene. All US states and territories have agencies tasked with child protection, although state laws vary in types of abuse and neglect and how they are investigated, the remedies and penalties available, and mandatory reporting requirements. At the federal level, the Administration for Children and Families under the Department of Health and Human Services provides resources and guidance in setting state policies and publishes statistics and research.

CAPTA requires each state to have mandatory reporting laws that require that certain individuals who know of or suspect that a child is being abused or neglected report that case to local child protective agencies. The personnel charged with mandatory reporting vary from state to state, but in most states, health-care providers, teachers and school staff, social workers, police, and counselors and therapists are mandated reporters. Some states expand mandatory reporting categories to include professions such as clergy, parole and probation officers, and even animal control officers. A person employed in a mandatory reporting position who fails to make a report can face civil and criminal penalties. Mandated reporters must undergo training to understand when and how to make a report if abuse is disclosed to them by a child in their care, as well as how to spot signs of abuse and neglect.

Physical abuse is defined as non-accidental physical injury and can also include acts or circumstances that substantially threaten a child with harm, such as substance abuse or physical violence directed at others in the home. Neglect encompasses failure to provide sufficient shelter, food, clothing, care, and supervision and in some states also includes failure to obtain proper medical care and education. All states mandate reporting of suspected sexual abuse and exploitation, including sex trafficking. Many states include emotional abuse, substance abuse, and abandonment in their mandatory reporting requirements. Signs of neglect and abuse can include marks of physical injury, appearing underfed, poor hygiene, ill-fitting or insufficient clothing, and behavioral responses like anxiety, depression, and withdrawal or acting out in inappropriately violent or sexual ways.

Formal full-time employment was common for children at the turn of the twentieth century, and reformers urged limits on child labor to protect children’s health and keep them in school at least through primary grades. The Fair Labor Standards Act of 1938 set basic standards and limits for the employment of minors that still largely apply in 2020, including the kinds of occupations open to them, the number of hours they can work, and the minimum wage they can receive. It states that children under age fourteen cannot hold jobs and those fourteen to seventeen are limited to various nonhazardous jobs.

In the twenty-first century, a significant number of minors work, particularly in part-time jobs during the summer months, though in declining numbers compared to the late twentieth century. In 2019 the Pew Research Center showed that in 2018 approximately 29.2 percent of teens between ages sixteen and nineteen had a part-time job throughout the year, rising to 34.6 percent during the summer. However, most federal labor restrictions do not apply to agricultural work, a holdover from a period when many children worked on their family’s farms. In 2020 children as young as twelve are permitted to work fifty- and sixty-hour weeks as farm laborers. Reformers have urged expansion of child labor restrictions to farm work, arguing that most of the minors doing difficult work are not working on family farms but on giant industrial farms as part of the poorly paid and often exploited migrant labor community. Not only are migrant farm laboring children deprived of education and many other child welfare protections, but they are often exposed to dangerous pesticides and fertilizers.

In the tobacco industry, labor activists point out the additional risk of nicotine poisoning among the many minors working in the tobacco fields. They are often more affected by nicotine because of their smaller stature, developing bodies, and closer contact with the plants. The use of subcontractors to supply laborers and the fact that most of the laborers are from Latin America, don’t speak English, and have little contact with the larger communities mean that most residents and even the farming operations and tobacco manufacturers are unaware of the extent to which child labor is used to bring their products to market.