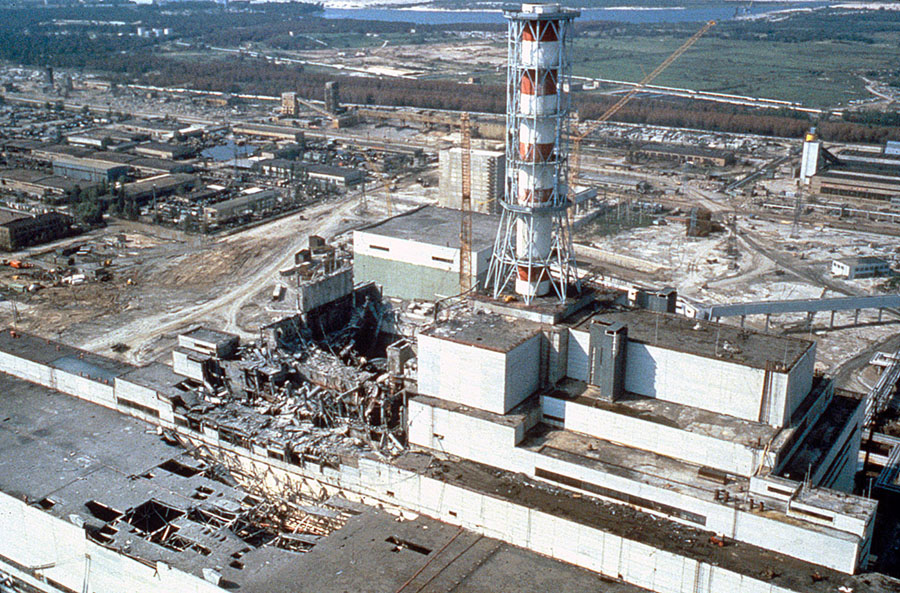 The explosion of Unit Number 4 at the Chernobyl Atomic Energy Station, which took place 34 years ago, has come to symbolize many things: scientific hubris, the danger of the atom, and even the failure of communism. We are constantly warned to learn “the lesson of Chernobyl.” But the path leading to the events of April 26, 1986, was so complex that there will be lessons enough for everyone. In The Legacy of Chernobyl, by Zhores Medvedev, and The Truth About Chernobyl, by Grigori Medvedev, both authors agree on one such lesson: disasters like Chernobyl are the inevitable result of closed, secretive societies where conformity is the rule and independence is punished.

Although both books promise to tell the “truth” about Chernobyl, it is hard to imagine two works more similar in title, subject, and even authors’ surnames that are more different. Zhores Medvedev, a dissident biologist expelled from the Soviet Union, has written a detailed and scholarly summary of the physical, ecological, and economic consequences of the Chernobyl accident. Grigori, a physicist and engineer (and no relation to Zhores), has written an extraordinary personal account of the accident based on his own inspection of the site and his interviews with the sick and dying. For Zhores, working from exile in London, Chernobyl was the culmination of the series of hidden ecological disasters he had been writing about for over a decade. For Grigori, a highly placed member of the Soviet nuclear establishment, it was a chance to fix blame for a remarkably misguided series of technical decisions made by political appointees.

Zhores Medvedev has spent years sifting the available Russian technical literature for clues to information suppressed by the Soviet establishment. He was the first in the West to break the news of the 1957 nuclear catastrophe at the Kyshtim reprocessing plant, which both the Soviet and the U.S. nuclear establishments had hushed up. Like his account of that accident – Nuclear Disaster in the Urals – and several similar books he has written, The Legacy of Chernobyl has resulted from a careful reading of the open literature interpreted with an exile’s knowledge of the society.

As medvedev ties together more and more apparently unrelated facts, we gradually come to realize the enormous damage Chernobyl has done to the region’s agriculture, health, and environment. Over 130,000 people, mostly farmers, have been permanently evacuated. Because of environmental radiation, people in large areas of the Ukraine can no longer eat, plant, or travel without thought of the consequences. Half a million people were exposed to life-shortening doses of radiation, and the effects on several hundred thousand children subjected to massive, and largely avoidable, doses of radioactive iodine remain to be seen.

Medvedev compares these figures with official accounts to prove that the Soviet government has systematically lied, and is still lying, about the accident’s causes and effects. The price of such deception, he writes, is high: “If the Chernobyl catastrophe itself was born of secrecy, many of the mistakes and miscalculations which were made afterwards and which significantly increased the human and economic cost were also the result of secrecy and coverup.”

Grigori Medvedev has a different aim in mind: “to reconstruct in authentic detail . . . a picture of the full horror of the Chernobyl nuclear disaster, to revive the dead and maimed and have them return to the control room to relive those tragic hours.” He succeeds.

Grigori Medvedev probably knows more about the Chernobyl accident than anyone else on earth. In the early 1970s, he was deputy chief engineer in charge of construction at Chernobyl Unit Number 1. Before that, he had received serious radiation exposure in a laboratory accident and had been hospitalized for months. Fifteen years later, as he interviewed dying Chernobyl victims in the same Moscow hospital ward – even the same bed – he had been in, he could understand their intense pain because he had felt it himself.

At the time of the Chernobyl accident, Grigori Medvedev was in charge of reactor construction at the Central Directory for Power Station Construction in Moscow. On May 8, 1986, just days after the explosion, he was sent to Chernobyl to find out what was happening. He was asked in particular to check on the radiation levels, which his bosses suspected were higher than was being reported. The author drove, at great personal risk, through the town of Pripyat, home of Chernobyl, stopping to measure radiation levels in the streets, and to monitor the half-crazed, starving farm animals wandering through the deserted town. He took readings around the reactor, where unprotected soldiers were picking up pieces of intensely radioactive debris by hand because robots had failed.

In an act of incredible bravery, Medvedev even entered the damaged reactor itself, penetrating to the control room of Unit Number 4 to study the position of the control rods at the instant of catastrophe. The air, he writes, was so ionized that it hurt to breathe, and the radiation so intense that his eyelids burned. He then interviewed the people who were in the control room during the accident and those who afterward fought fires at the out-of-control reactor.

Grigori Medvedev’s tale, told as a long flashback, climaxes with a minute-by-minute countdown to the accident. He reconstructs the confusion of those present when the reactor unaccountably began to tremble and then, in a series of massive explosions, destroyed itself and its immediate surroundings. He tells of the horrifying effects of radiation on the operators and the firefighters. We learn about the combination of fatigue and nervous excitement that accompanies moderate radiation doses and the telltale “nuclear tan” that portends months in the hospital, or worse. He also damns by name a roster of officials ranging from the deputy chief engineer of the power station to the Soviet minister of energy. It is they whom he holds accountable – whether out of indifference, greed, laziness, stupidity, or stubbornness – for the weakness of the Soviet nuclear program and, ultimately, for dozens of agonizing deaths.

Both Zhores and Grigori have used Chernobyl to tell their stories and to settle old accounts. Yet when we come to the promised lessons of Chernobyl, we find the authors’ energies spent.

Zhores meekly concludes that nuclear power is essential, and that therefore we must be more careful. Grigori, after spinning his gripping tale, presents a list of things that must be done. The first item is typical: “The tip switches of the SUZ protection and control rods are to be modified so that, in the fully withdrawn position, the absorber rods will still be inserted into the core to a depth of 47.25 inches.” Platitudes and engineering details are not the lessons we had hoped for.

But we can draw our own lessons. The first is that large nuclear accidents are not tolerable – the moral and tangible costs are too high, as both books make plain. The second is that systems that depend on human beings consistently behaving rationally and intelligently will ultimately suffer an “impossible” accident. At all of the world’s nearly 500 nuclear reactors, safety depends on workers following elaborate safety procedures. Third, the redundancy built in to reactors gives a false sense of security.

Like Chernobyl and Three Mile Island, all operating nuclear plants rely on the concept of “defense in depth” – an attempt to reduce the probability of total failure by having multiple, redundant, interconnected systems. But beyond a certain level of redundancy, defense in depth is worse than useless. Nuclear plants have come up against the limit.

To illustrate the folly of defense in depth, suppose we wanted to design an airplane in which the chance of all engines failing at once was minimal. We could put on seven engines instead of three. But then more of the engines would have to work to carry the extra weight, and we would need a new control system to operate the complex bank of engines – not to mention a backup safety system for the control system, and a larger power supply and backup, and a new control algorithm for the control computer, and so on. In the end, we would have increased costs enormously, made maintenance far more difficult, and very likely reduced our safety margin. Tellingly, the Chernobyl accident resulted from a test of the reactor’s complex safety system.

Nuclear reactors require such a high level of safety that defense in depth becomes untenable. The “inexpensive” reactors of the first nuclear generation, chosen because they had military potential and used cheap components, have turned out – when the full defense-in-depth system is installed – to be very expensive and still not safe enough.

Fortunately, a new generation of “inherently safe” reactors does not rely on human and mechanical perfectibility. These modular gas-cooled reactors are incapable, by the laws of physics, of damaging their cores and releasing radiation. They are much smaller than today’s commercial reactors and use a very different technology. Although they have been around for a long time, technology has only recently become available to enable small systems to generate electricity at a competitive cost.

Unfortunately, the nuclear establishment views these reactors as a threat. Any reactor designated inherently safe carries a strong implication about existing reactors: that they are inherently dangerous. And indeed they are. The industry has been hoping that no one would notice, but it has been very hard to hide Chernobyl.