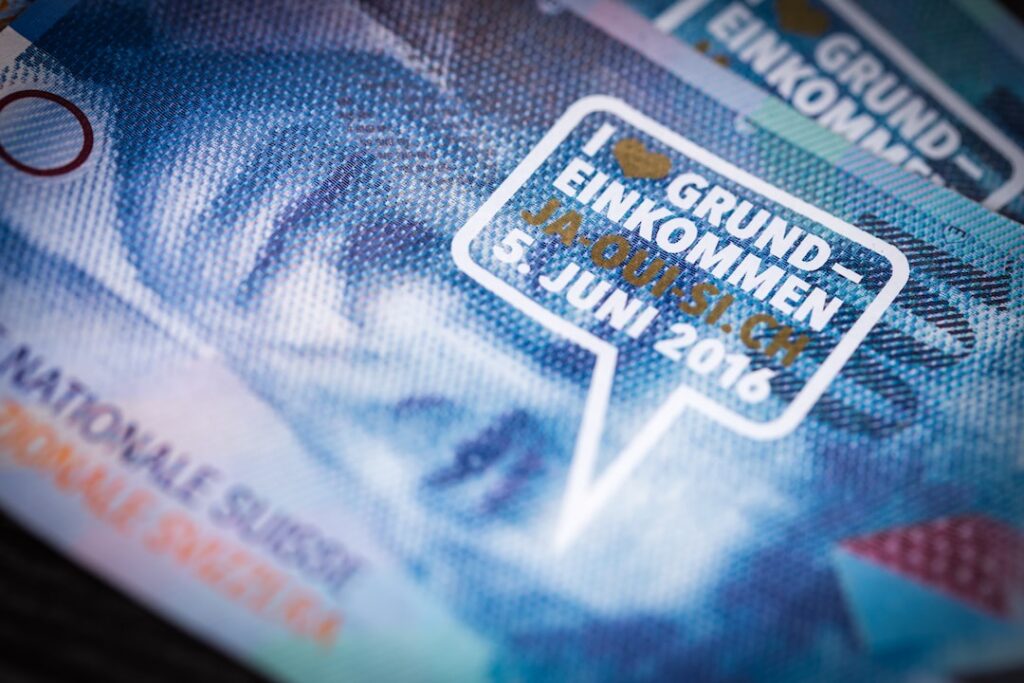 As income inequality increases in the United States, economists and politicians have proposed wide-ranging ideas for distributing wealth more fairly and ensuring that all Americans—rather than only the richest few—benefit from the nation’s resources, productivity, and technological advances. One proposal that has garnered support from diverse interest groups across the political spectrum involves establishing a universal basic income (UBI). Also known as a guaranteed minimum income or basic income guarantee, UBI provides all individuals in a nation or society with a periodic monetary payment that enables them to meet their basic needs. The payments are made unconditionally, meaning that individuals receive the money regardless of their employment status or income level and have full discretion to decide how to spend it.

Background of the UBI Model

The concept of UBI has existed in various forms for centuries. As early as the 1500s, the English philosopher Thomas More discussed the societal benefits of providing a guaranteed minimum income in his book Utopia. A number of influential economists proposed versions of UBI during the twentieth century, including Bertrand Russell, John Kenneth Galbraith, and Milton Friedman. In the twenty-first century, technology pioneers such as Mark Zuckerberg and Elon Musk have expressed interest in UBI as a potential solution to unemployment caused by increasing automation.

The US government provides various forms of assistance to help ensure that low-income citizens who are elderly, disabled, unemployed, or caring for young children can meet their basic needs for food, housing, education, and health care. Social welfare policies and programs such as Temporary Assistance for Needy Families, Supplemental Security Income, Medicaid, the Earned Income Tax Credit, and the Supplemental Nutrition Assistance Program (SNAP) provide a safety net for people whose annual income falls below the federal poverty level (FPL) ($25,100 for a family of four in 2018). Such programs have the same goals as UBI—improving the standard of living for citizens who lack financial resources—but recipients must meet strict qualification requirements to receive benefits, and the payments typically must be used for specific expenses. Proponents of UBI also argue that existing social welfare programs are inadequate to mitigate against income inequality because measures like the FPL do not accurately reflect the cost of living.

In an era of rising income inequality and stagnant wages for workers, millions of Americans with steady jobs still have trouble making ends meet. According to a 2018 US Federal Reserve Board survey, over 20 percent of Americans reported being unable to pay all of their current month’s bills in full and 40 percent reported that they would not be able to cover an unexpected expense of $400. Faced with a pressing health concern or a necessary home repair, these workers would have to borrow money, sell possessions, or go without basic needs. Proponents view UBI as a way to provide a measure of financial security for this segment of the population.

Benefits and Drawbacks of UBI

Supporters of the UBI concept argue that it offers many potential benefits to society. Guaranteed income may increase consumer spending and thus lead to economic growth. UBI may also increase the bargaining power of workers by providing a financial safety net if they choose to leave their jobs, which may promote higher wages. Proponents also claim that UBI would eliminate or reduce many of the negative health impacts associated with poverty, such as teen pregnancy, infant mortality, low birthweight babies, malnutrition, and obesity. Public health experts attribute these effects to the combination of greater access to food and health care and the easing of major stressors that exacerbate physical and mental health problems. A guaranteed income may give low-income parents the flexibility to spend more time with their families by eliminating the need for a second or third job and allow underprivileged children to achieve better educational outcomes. Supporters also assert that UBI may reduce crime and increase racial and gender equality, as poverty and economic insecurity disproportionately affect women, people of color, and other marginalized populations. Finally, some proponents say that freedom from financial peril may encourage people to pursue their passions and take risks, leading to increases in creativity, innovation, and entrepreneurship.

Opponents of the UBI model contend that it creates disincentives for people to work. Many Americans believe that poverty results from a lack of effort rather than circumstances beyond an individual’s control, and they object to rewarding the poor by providing free cash handouts. They argue that government assistance should be difficult to obtain in order to prevent people from becoming dependent on it. Some critics also express concern that low-income people will spend UBI payments on drugs or frivolous expenditures rather than basic needs. Opponents also claim that a national UBI program would be too costly to implement. Based on 2017 population estimates, providing every US citizen with a $10,000 annual payment would cost the government $3.2 trillion each year. However, the cost would be significantly reduced if the payment was not provided to wealthy people, dependent children, and retired people who receive Social Security. Critics also question how a UBI program would be funded. Many Americans resent proposals that involve a redistribution of wealth from rich to poor, arguing that the free-market capitalist economic system is based on competition and should reward those who do well.

The UBI model has been tested in many countries around the world, including Canada, the Netherlands, Finland, Scotland, and Kenya. One of the longest-running basic income programs was implemented in Alaska in 1976 when state lawmakers established a permanent fund for the collection of oil revenues. This fund began paying an annual, unconditional, monetary dividend to every resident of Alaska in 1982. In 2018 the payment amount was $1,600 per person. Proponents claim that the annual dividend reduced the state’s poverty level, increased consumer spending, and led to the creation of 10,000 jobs.

As of 2018, at least three UBI pilot projects were in the planning stages in the United States. Two projects, both in California, were privately financed by wealthy technology entrepreneurs who sought innovative ways to address the workforce displacement and job loss that could occur in the future due to automation of tasks using robotics and artificial intelligence software. An experiment funded by the venture capital firm Y Combinator Research proposed paying a UBI of $1,000 per month to a test group of 1,000 low-income residents of Oakland between the ages of twenty-one and forty for a period of three to five years. Researchers plan to collect data on participants’ spending as well as track changes in their physical health and social well-being. A smaller project known as the Stockton Economic Empowerment Demonstration proposed paying a guaranteed income of $500 per month to 100 participants for eighteen months to gather information about the impact of UBI. Additionally, Chicago mayor Rahm Emanuel announced in September 2018 the creation of a task force to study a proposal that would pay $500 per month to 1,000 of the city’s struggling families, making Chicago the largest US city to consider implementing some type of UBI.