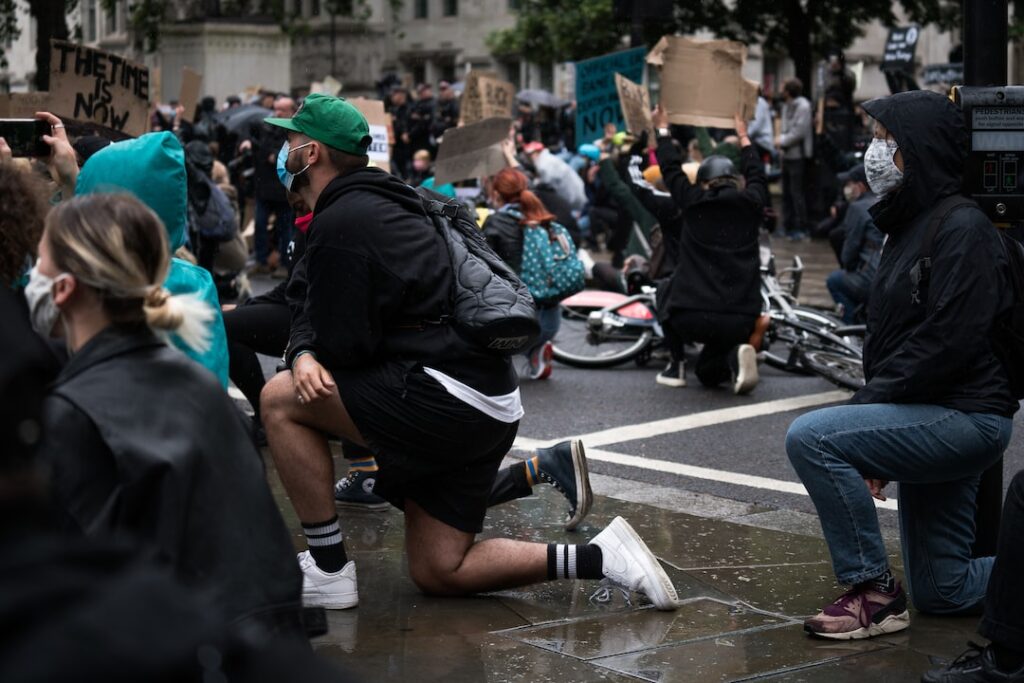 The 1949 dystopian novel Nineteen Eighty-Four, also expressed numerically as 1984, was written by author George Orwell (1903–1950), who warns readers against totalitarianism, a system of absolute authority, which he imagined would occur a little more than three decades in his future.

British journalist and author George Orwell was born Eric Arthur Blair in India and attended school in England, where he chafed under the restrictive atmosphere. He then joined the Indian Imperial Police in Burma, but in 1927, quit his job to write and moved to Paris, where he held odd jobs and used the experience for his first book, Down and Out in Paris and London, for which he adopted his pseudonym. Orwell then exclusively worked as a journalist and editor. He considered himself a socialist and anti-Stalinist, and out of his beliefs grew Animal Farm in 1945 and Nineteen Eighty-Four four years later. He died of tuberculosis in January 1950.

Winston Smith lives in London in the nation of Oceania and works for the Party, which sees, knows, and controls everything. The Party and its figurehead, Big Brother, implement a new language called Newspeak to prevent any dissention by outlawing words connected to rebellion, and love, free thought, and individual expression are all prohibited. The Party produces enemies that it says threaten Oceania as a means to unite its citizens through fear.

Winston works in the Ministry of Truth, which is the department in charge of rewriting history. As the Party’s message changes, all records that contradict it are altered. Winston becomes critical of the Party and its control over everything and wonders why the truth is what the Party says it is. He illegally records his own experiences in a diary and begins an illegal relationship with a coworker named Julia. They rent a room above a store in the prole district, an unmonitored poor area of London where the non-Party proletarians, or proles, eke out a living. Winston knows that he and Julia will be caught and punished, but Julia—who seeks pleasure—is optimistic.

A group called the Brotherhood is believed to be working against the Party, and Winston suspects that a Party leader named O’Brien is secretly a member of the Brotherhood. Winston is not surprised when he is summoned to O’Brien’s opulent home for a meeting, and O’Brien identifies himself as a rebel with the Brotherhood, invites Winston and Julia to join, and gives Winston a book containing the Brotherhood’s message.

When Winston and Julia read the book, they are soon arrested in their rented room, and Winston is taken to the Ministry of Love, which is the torture center, where O’Brien reveals his true identity as a Party spy and then tortures Winston for months, but Winston resists. Finally, O’Brien puts him in Room 101 and threatens him with rats, Winston’ greatest fear. When O’Brien produces a cage of rats that he will allow to eat Winston’s face, Winston begs him to turn the rats on Julia instead.

Now that he is thoroughly under the Party’s control, Winston returns to society, where he see Julia and feels repulsed by her. Recalling a song that upsets him, Winston focuses on Big Brother on a nearby telescreen to feel content and secure.

Winston Smith is a thirty-nine-year-old intellectual and a minor member of the Party in London who works in the Ministry of Truth, where he changes history to conform to the Party’s message. He despises the authoritarian government and wishes to change society.

The beautiful Julia works in the Fiction Department at the Ministry of Truth and brags about the sexual affairs she has had with Party members. She and Winston become lovers. While she wants to overthrow the government, Julia likes the notion of revolution but does not embrace the ideas.

Big Brother is the face of Oceania and may not exist as an individual, but his image is on posters and screens everywhere. His message—Big Brother Is Watching You—permeates society.

Mr. Charrington seems to be a friendly man who runs a secondhand store and rents Winston a room where he can secretly meet with Julia, but Mr. Charrington is actually a member of the Thought Police and reports the couple.

Orwell spent time in Spain and escaped from Soviet-supported Communists, so he saw firsthand the horrors of a totalitarian regime. With Nineteen Eighty-Four, he warns against allowing communism to spread. Orwell also was concerned about how technology could be used to monitor citizenry and chose the title to warn readers that his vision could be a near threat.

Everywhere Oceania’s citizens go, they are faced with telescreens that both watch them and project Party messages, and omnipresent images warn that Big Brother is watching. Children are enlisted to spy on their parents, and the Party creates threats, which are common enemies, while reassuring citizens that only the Party is protecting them. In addition, the Party creates, outlaws, and redefines words and controls language so that individuals are unable to question terminology or leadership.

Physical control is evident throughout the novel, as the Party outlaws sexual pleasure, defining intercourse as only a means to procreate. Every day, citizens are required to participate in group exercises and work until they are exhausted.

Torture is used to brainwash anyone who does not conform to the Party line. Under physical and psychological torture, Winston responds to the threat of rats by betraying Julia because the fear of pain overrides his ability to control his body and thoughts.

Doublethink is a form of psychological control. By breaking people minds, the Party ensures that individuals will believe anything they are told, even if the information is illogical. As an example, the Party says that two plus two equals five, and the citizens do not question this.

The Party controls history and information, and by controlling technology, it decides what message is disseminated and rewrites all documents to reflect this. Personal photographs are forbidden, so the Party also exerts control over everyone’s past and memories.

Nineteen Eighty-Four has influenced popular culture since its publication, and authors such as Margaret Atwood (1939–) cite it as inspirational. References to Big Brother, the Thought Police, doublespeak, and other elements of the novel have entered common usage. The term Orwellian, for example, is used to describe dystopias.

When the novel was first published in 1949, Orwell was an established and respected author. His 1946 satire Animal Farm had been well received. In Nineteen Eighty-Four, he presents very similar ideas in a London that readers at that time could easily envision. Right-wing American factions embraced his ideas as support for their anti-Communist crusade. Orwell, who died about seven months after the novel was published, insisted such factions were misinterpreting his work. Critics have continued to disagree over the true message of Orwell’s novel, although it is largely viewed as a warning against totalitarianism.

In spite of paper rationing that continued after World War II (1939–1945), Nineteen Eighty-Four was a bestseller in Britain, moving fifty thousand copies its first year. Americans also bought hundreds of thousands of copies, and the novel was translated into many languages.

The novel has been adapted to film, radio, and television productions. Renewed interest in Nineteen Eighty-Four was credited to the 2016 election of Donald Trump (1946–) as president of the United States. A film adaptation of the novel released in 1984 was rereleased in some theaters in April 2017, and sales of the book in 2017 increased 340 percent over 2016 numbers, launching the novel once again onto bestseller lists. A Broadway production based on the novel debuted in 2017, and a film adaptation was anticipated for a 2019 release.