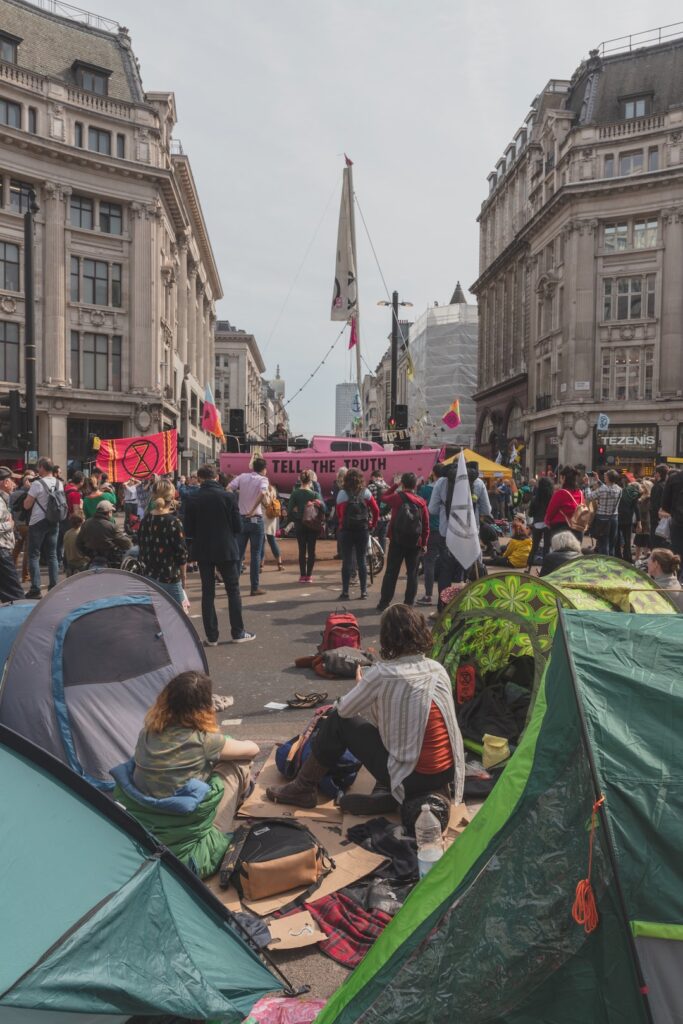 The right of the American people to join in peaceful protest and petition is protected by the First Amendment of the US Constitution. Citizens are guaranteed the freedom to gather, whether for political purposes or not, to discuss or show support for an idea or movement, even if unpopular, and to express their ideas freely and peacefully. This freedom is considered a fundamental right along with those of free speech and a free press. The collective expression of protesters and petitioners has impacted social and political causes throughout US history, including the labor, women’s rights, and civil rights movements. Because these demonstrations can disrupt people’s lives, governments have sometimes challenged freedom of assembly, citing public safety, economic, or health concerns. Federal, state, and local governments have the right to break up a gathering that they have determined is no longer peaceful. However, governments have also attempted to restrict or disperse gatherings for political reasons.

MAIN IDEAS OF FREEDOM OF ASSEMBLY

Passive, non-violent resistance involves peaceful demonstration, such as a sit-in or boycott, to achieve a goal or communicate a viewpoint. Non-violent movements can entice citizens to participate through creating sympathy for their cause. Theories of non-violent resistance were proposed by Henry David Thoreau (1817–1862) in his essay, Civil Disobedience (1849). Thoreau, an opponent of the then-legalized practice of slavery, argued that unjust laws should be resisted through peaceful means. Peaceful demonstration has played a role in various movements in history, including the abolition, labor, and women’s suffrage movements.

Dr. Martin Luther King Jr. (1929–1968), inspired by the peaceful demonstrations led by Mohandas “Mahatma” Gandhi (1869–1948) in India, developed a philosophy based around civil disobedience before becoming a leader in the civil rights movement of the 1950s and 1960s.

Non-violent protests led and inspired by Dr. King, including sit-in protests in Greensboro, South Carolina, and protest marches in and around Selma, Alabama, contributed to changes such as the Twenty-Fourth Amendment, which struck down poll tax laws restricting the voting rights of Black Americans, and a series of Civil Rights Acts throughout the 1960s.

Whether peaceful assembly is permitted on private property has been debated in the US court system. In one influential case, State v. Schmid (1980), the New Jersey Supreme Court established three factors to determine whether a gathering on private property was permissible: why the property in question was being used, whether or not the property was open to public use, and the purpose of the gathering as it related to the private or public nature of the property. The application of these three questions became known as the Schmid test after it was used to acquit Charles Schmid, who had been charged with trespassing for distributing United States Labor Party materials at Princeton University.

Media scholars have found that media coverage of peaceful protests often focuses on dramatic moments or sensationalized figures, while ignoring protests without such elements. As a result, the nature of public demonstration in the United States is often overtly theatrical. One example of this theatricality is the “die-in” or “lie-in,” during which protestors will fall prone on the ground, sometimes simultaneously, for dramatic effect. Such demonstrations were first seen in the United States in the 1960s and 1970s as protests against the nation’s involvement in the Vietnam War. In the 2010s and 2020, this form of protest was used again in response to the high-profile killings of Black people, such as Michael Brown Jr. (1996–2014), Eric Garner (1970–2014), and George Floyd (1973–2020), by police.

Individual rights can be more effectively protected when people band together. Separately, individuals may lack resources or power, but in joining together they can leverage their skills or resources to benefit the group. In the workplace, a group that has joined together in order to gain collective bargaining power is known as a union. Unions provide protection and camaraderie to their members while lobbying employers, government, and other powers to protect their individual and collective rights. In most cases, the right of private-sector employees to join a union is protected by the National Labor Relations Act (NLRA) of 1935, also known as the Wagner Act.

Historically, unions have petitioned for improved working conditions. Common protest tactics include worker strikes and mass picketing, which is the act of gathering together outside of a business or property in order to communicate demands, draw attention to an issue, and prevent others from entering or exiting. Picketing rose in popularity in the 1930s and 1940s in lieu of sit-down strikes, which had been declared illegal. However, opponents of picketing argue that it ultimately harms small businesses.

The public effects of such large-scale demonstrations, sometimes including acts of violence and confrontations between protesters and police, drew significant criticism from business leaders and politicians. The combined interests of these groups led to the Labor Management Relations Act (LMRA) of 1947, also known as the Taft-Hartley Act, which amended the NLRA to limit the power of unions and their methods of public demonstration, including picketing. President Harry Truman vetoed the LMRA, but his veto was overturned a few days later. The LMRA also allowed states to ban requiring union membership for employees who work in unionized industries or workplaces. Such states are known as “right-to-work” states. Proponents of this “right-to-work” status argue that it allows workers to choose whether or not to join a union while enjoying the benefits of the union regardless of their decision. Opponents argue that it weakens unions’ power and effectiveness. As of 2020, twenty-seven states are considered “right-to-work” states.

Because public protests can sometimes create disturbances in the lives of other nonparticipants, communities and authorities sometimes view them with concern. The First Amendment specifically protects peaceful gatherings and ceases to apply if a gathering turns violent. In the 1963 case of Edwards v. South Carolina, the US Supreme Court determined that peaceful demonstration of views, even unpopular ones, was protected after several civil rights activists were arrested for disturbing the peace. However, the court has also decided cases that placed limitations on the extent of free speech in a public setting. In the 1919 case of Schenck v. United States, the court’s decision created the concept of a clear and present danger test, in which words are evaluated on whether or not they constitute imminent incitement of violence or lawlessness; the example of shouting “fire” in a crowded theater was cited during this case.

Authorities are permitted to place time or space limitations on a gathering, such as a curfew dictating when an assembly must end. While a gathering cannot be broken up by authorities simply for disturbing the peace, it can be broken up if there is determined to be a clear and present danger to the public, meaning that violence is plainly going to break out. This means that law enforcement can act if there is clear evidence of rioting, looting, or disruption of traffic. In the face of escalation, law enforcement may also issue a dispersal order and attempt to break up a gathering. In such cases, officers are required to grant a clear exit route and enough time for individuals to comply before resorting to force. Such force may take the form of nonlethal weapons such as water cannons, flash grenades, rubber bullets, or irritants such as tear gas and pepper spray. However, there have been cases throughout history of crowd control resulting in casualties, such as the Kent State shootings of 1970, during which members of the National Guard fired on a gathering of students at Kent State University, resulting in four deaths. In addition, critics question whether law enforcement routinely provide protesters with clear directions and sufficient time to comply with dispersal orders.

The escalation of public protest into clashes with law enforcement and the methods by which such clashes are handled have contributed to debate on the increasing militarization of US police forces. Beginning in the late twentieth century, law enforcement agencies in the United States have been provided access to military-grade equipment. This arrangement was expanded under the administration of President Donald Trump. Proponents argue that military-grade equipment reduces crime, while opponents counter that it results in more cases of police brutality and creates public distrust of the police. For example, the responses of law enforcement agencies to the 2014 protests over the death of Michael Brown in Ferguson, Missouri, and the 2016 protests over the death of Keith Lamont Scott in Charlotte, North Carolina, were criticized for being overly militaristic.

ROLE OF MEDIA AND GOVERNMENT

The differing ways public demonstrations are reported by media and dealt with by authorities show disparities between groups in the United States. Examples emerged in 2020 as protests occurred over lockdowns during the novel coronavirus (COVID-19) pandemic of 2019–2020 and the killing of George Floyd by police. Throughout April and May of 2020, thousands of people gathered across the country to protest COVID-19 lockdowns and regulations, which many viewed as causes of economic hardship and infringements of their rights. During one such protest in Michigan, armed demonstrators were able to enter the capital building. No arrests were made, and President Donald Trump showed support for the protests on his Twitter account.

In May and June of 2020, the killing of George Floyd by Minneapolis police sparked a series of massive protests throughout the nation, motivated by systemic racism and police brutality against Black people in the United States. The protests were met in some cases with police in riot gear and state-enforced curfews, and much of the media coverage of the protests focused on sporadic outbreaks of rioting, looting, as well as violence from both protestors and police. Critics of this response point to disproportionate displays of riot control when compared to other protests, including those in response to the lockdowns. Additionally, President Trump appeared to support violent responses to these protestors on his Twitter account, including invoking a quote made infamous during the civil rights era: “When the looting starts, the shooting starts.”