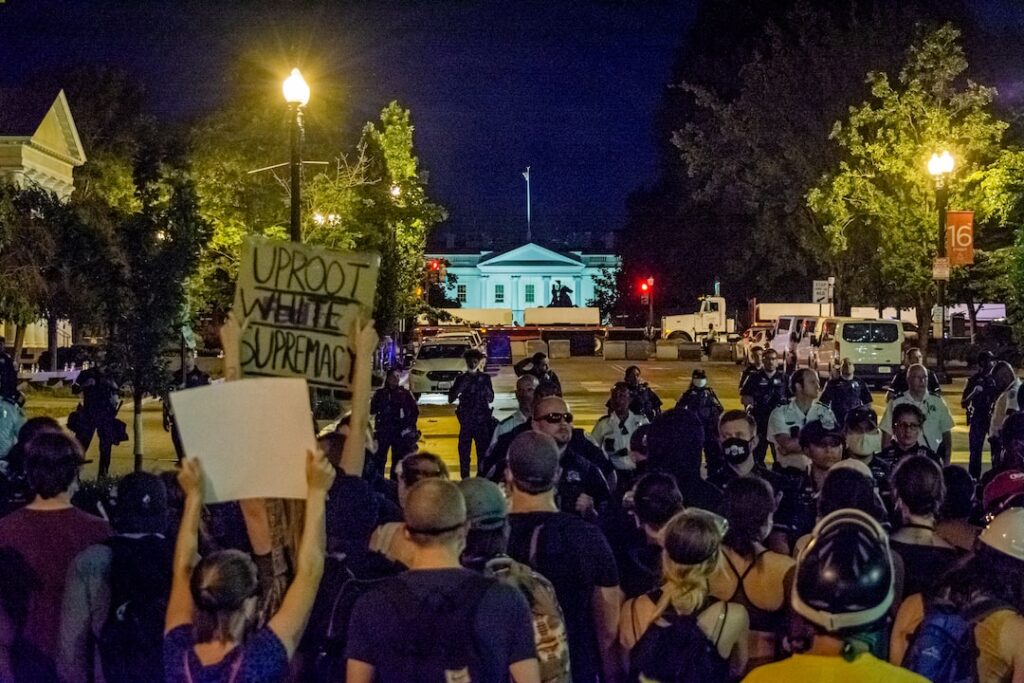 White supremacy refers to the belief that white people are innately better than people of other races or ethnicities and therefore uniquely suited to rule society and establish its norms. This belief system can manifest itself as both personal sentiment and structural policy. European powers exported such beliefs through empire building and incorporated supremacist values in the colonial governments they established around the world. White supremacy also has cultural manifestations. For example, the English language contains many words and phrases with racial origins that continue to be used and perpetuate negative perceptions of nonwhite people.

In the United States, government officials used the tenets of white supremacy to justify the genocide and forced assimilation of the Native Americans, the enslavement of Africans and their descendants, immigration quotas, and other policies that advantaged white people over other racial groups. In addition to government policies, sentiments of white supremacy pervade many of the country’s cultural institutions, including education, employment, science, and the media. Moreover, in the twentieth and twenty-first centuries, groups and individuals committed to extremist white supremacist ideology have committed terrorist acts in the name of white supremacy.

The building of empires throughout history has seen nations impose their way of life on the peoples they conquer. Powerful empires emerged around the world with relatively limited contact with one another until European nations heavily invested in overseas exploration during a period commonly referred to as the Age of Discovery (1400s–1600s). As a historical term, the “Age of Discovery” embodies an attitude of Eurocentrism, or the belief that the experiences of Europeans are central to world history. Such attitudes ignored the fact that the places Europeans “discovered” were already inhabited and had their own cultures, traditions, and histories.

European explorers were emboldened by the teachings of their churches, which suggested they had a responsibility to convert people to Christianity. As a result, Christian missions were established shortly after arrival. As European countries expanded their global presence in the Americas, Asia, and Africa, European traders and settlers used their Christian faith to declare themselves superior to local populations and as a means of control.

Their mastery of seafaring vessels allowed European powers to expand their international trade. To achieve further economic advantage, Europeans engaged in the transatlantic trade in enslaved persons, in which 12.5 million Africans were forcibly taken to work in the Americas. Widespread belief in white supremacy enabled the system of slavery, and its legacy continues to inform the politics of all countries involved in the slave trade, especially the United States.

By the 1700s European countries had established themselves throughout the Americas. White settlers saw themselves as the rightful inheritors of the American frontier, and this attitude informed their contact with the Indigenous peoples. Colonial rule in the Americas ended in the late 1700s and early 1800s as the colonial populations gained independence from European states. Founded on European governing principles and within the context of white supremacy, these newly established countries codified structural racial hierarchies that assumed authority belonged to white men. With this development, European powers, and later the United States, turned their attention to Asia and Africa where they sought to expand their empires and global influence. The foreign powers set up schools, colonial governments, and other institutions that promoted white culture and values as superior to local ones.

Throughout the 1800s, in efforts to expand trade, European countries and the United States adopted foreign policies that forced nonwhite populations to accept unfair terms. For example, the British Empire intentionally flooded Chinese markets with opium after becoming frustrated with its terms of trade with the Qing dynasty in China, leading to the Opium Wars (1839–1860). In 1854 the United States threatened Japan to open trading relations under the threat of military action, a policy commonly referred to as gunboat diplomacy.

The major European powers of the late nineteenth century competed to gain control over as much of the African continent as possible. This period, commonly referred to as the Scramble for Africa, was characterized by an appetite for the continent’s natural resources and a belief that white people should “civilize” local populations. In 1884 representatives from twelve European powers, the United States, and the Ottoman Empire met in Berlin, Germany, to discuss how to divide the land up among themselves; no Africans attended.

Though many former colonies have achieved independence and the international community officially supports self-determination, Europe and the United States continue to exert a disproportionate influence on global politics, economics, and culture. This dominance over world affairs can be described as hegemony, an idea popularized by Italian philosopher Antonio Gramsci. Western hegemony reinforced white supremacy as white people in predominantly white countries accumulated more wealth, power, and influence. Within this context, white becomes increasingly associated with value. The insidiousness of how cultural value is perceived allows white supremacy not only to affect government and economic policy but to be deeply ingrained in social customs, beauty standards, and other more nuanced areas of life.

SYSTEMIC RACISM IN THE UNITED STATES

From its colonial origins, the United States has depended on the exploitation and brutalization of nonwhite people. The land itself was taken from millions of Indigenous peoples organized in hundreds of nations prior to European colonization. Early economic growth, especially in the South, relied heavily on the labor of enslaved Africans and their descendants. Immigrants from Asia and Central and South America worked on farms, built railroads, and provided other strenuous labor that enabled the country’s expansion and prosperity, typically for lower wages than their white counterparts and without the same protections or rights.

Slavery continued in the United States after the newly established country achieved its independence from Great Britain in 1781. At the Constitutional Convention in 1787, delegates debated over whether to include the enslaved population when determining the number of representatives each state would have in Congress. The delegates decided that each enslaved person was worth only three-fifths of a white person.

At the beginning of the US Civil War (1861–1865) when the slave-holding states seceded from the country to form the Confederate States of America, Confederate vice president Alexander Stephens proclaimed that the newly formed country’s “cornerstone rests, upon the great truth that the negro is not equal to the white man; that slavery subordination to the superior race is his natural and normal condition.” The speech, commonly referred to as the Cornerstone Speech, provides evidence that the Confederacy was built on a framework of white supremacy. Such evidence challenges the “Lost Cause of the Confederacy,” a revisionist interpretation of history that asserts slavery was not the cause of the war.

Though the Thirteenth Amendment abolished slavery in 1865, white supremacy continued to pervade political and social policy in the United States. Throughout the South, African Americans faced obstacles to voting, discrimination in employment, and widespread segregation, all supported by the law. The Supreme Court ruled in Plessy v. Ferguson (1896) that racial segregation did not violate the Constitution if “separate but equal” options were provided.

The segregation of public facilities was among many ways that official policies limited nonwhite people’s access to services and opportunities. Though the Fifteenth Amendment prohibits voting restrictions based on race, for example, public officials put policies in place like literacy tests and poll taxes to prevent nonwhite people from voting. Black veterans returning from World War II (1939–1945) could not access the same benefits of the Servicemen’s Readjustment Act, commonly known as the GI Bill, as their white counterparts who took advantage of the bill’s benefits such as low-interest loans and tuition for school.

Immigration policy has also supported white supremacist values. For example, the Chinese Exclusion Act prohibited Chinese people from coming to the United States from 1882 until 1943. Immigration policy put forth in the 1920s set quotas on how many immigrants could come from different countries, with a noted preference for Northern Europeans. The quota system continued until the passage of the Immigration and Nationality Act of 1965.

Unethical yet legal practices like redlining—the demarcation by the government of areas where African Americans lived as bad investment risks—and blockbusting—encouraging white homeowners to sell their property over fears that Black families may be moving to the area—made homeownership difficult for nonwhite Americans. Further, in many areas, the interstate highway system was intentionally built to geographically segregate whites and nonwhites. Homeownership is one way that parents can pass on wealth to their children, and obstacles to homeownership have made the accumulation of generational wealth more challenging for nonwhite families. Geographical segregation has kept nonwhite Americans from the centers of business and political power as people can best network within their own local community.

Though the Supreme Court overturned Plessy v. Ferguson in Brown v. Board of Education of Topeka, Kansas (1954) and ruled that public schools could not be segregated on the basis of race, the reality of geographical segregation has allowed schools with substantial racial majorities to persist into the twenty-first century. For example, some studies have found that school districts in majority nonwhite communities receive less funding than schools that serve majority white communities, perpetuating unequal access to resources and education.

Lawmakers have also perpetuated white supremacy in the United States through the enactment of laws that appear race-neutral but disproportionately affect nonwhite people. Criminal justice experts have highlighted, for example, how drug laws have been used to target minority populations and how white offenders often face less harsh penalties for similar offenses. The mass incarceration of Americans that began in the 1970s has inordinately affected communities of color. Consequences of mass incarceration include broken families, human rights abuses, and widespread disenfranchisement as many states deny the vote to people with felony convictions.

Further complicating the relationship between mass incarceration and white supremacy, the Thirteenth Amendment allows slavery and involuntary servitude as punishments for a crime. The US prison population, which is disproportionately Black and Latinx, work for free or extremely low wages while receiving none of the usual protections awarded to US workers, such as minimum wage and a safe working environment. Work by prisoners is often referred to as “modern slavery” by advocates of prison and criminal justice reform.

Most mainstream politicians do not explicitly endorse white supremacy, but some directly support its ideals in covert ways. In a 1981 interview, for example, Republican political operative Lee Atwater described an approach to campaign politics known as the Southern Strategy in which candidates used euphemisms like states’ rights and cutting taxes to stand in for support of white voters over the concerns of nonwhite citizens. Critics refer to such euphemisms as “dog whistles” meant to convey messages about racial minorities in order to inspire solidarity with white voters. The strategy continues to be used in American politics in the twenty-first century.

White supremacist groups have emerged in the twenty-first century largely as a response to gains made by social movements that promote multiculturalism and racial justice. Fringe intellectuals have characterized trends in the liberal arts as attacks on Western civilization. The popularity of such ideas can be seen in the rhetoric of Western chauvinist groups like the Proud Boys and the Christian Identity movement. Though mainstream society largely rejects these groups and their ideas, white supremacist groups continue to attract new members. Members of these groups have been linked to a growing number of cases of racially motivated harassment, vandalism, and violence, including bombings, mass shootings, and other acts of terrorism. Some federal law enforcement officials consider white supremacy and far-right extremism to be among the greatest threats to US domestic security.